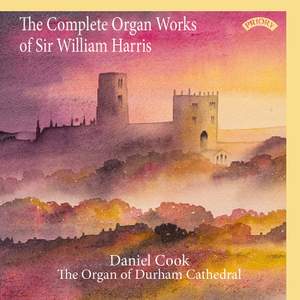 Most pieces are short: processionals, meditations, elegies, voluntaries, etc, but the fantasies on traditional melodies and the one sonata are larger in scale. Harrison & Harrison’s ‘flagship’... — Choir & Organ, May 2020, 4 out of 5 stars More…

Harris, W: Flourish for an Occasion

Harris, W: Improvisation on the Old 104th (After Ravenscroft)

No. 1, Prelude in E-Flat Major

No. 3, Interlude in the Form of a Canon

No. 2, Meditation on the Tune "Cheshire"

The name Sir William Harris, KCVO, MA, DMus, FRCM, FRCO conjures up images of grand Royal state occasions at Windsor, coronations in Westminster Abbey and ‘pomp and circumstance’ in general. To many church musicians his name also brings to mind the eight-part anthem Faire is the Heaven, surely one of the greatest pieces of Anglican church music of the last century. A man who was humble, mild-mannered, humorous, deeply spiritual, dedicated to his church work, loyal to his friends, restrained in his organ accompaniments and, sadly, impoverished in his later years hardly seems to be a description of the same man, yet they were indeed one and the same.

On retirement from Windsor and the RSCM in 1961 the Harris’s moved to stay with their daughter in Petersfield. The Windsor appointment was for ‘life’, carried no pension and most Windsor organists died ‘in post’. Harris’s longevity and poor salary meant they could not afford a house and had no regular income. Harris had never been practical in any domestic way and so the domestic routine was maintained by his wife. This was so even during his years at St George’s when she organised his rigid routine, breakfast, coffee and biscuits and afternoon tea all arranged at fixed times. All he needed to think about was his music. In retirement it was breakfast, composing, coffee, composing, tea, composing etc – all organised for him. Harris was a lifelong smoker who defied all medical predictions until his death at the age of 90 in 1973.

This is the first time that his complete organ works have been recorded. Many are published but thanks to Dr John Henderson some were found in manuscript and unpublished. Daniel Cook who has recorded many CDs for Priory of neglected English organ composers plays the Harrison and Harrison Organ of Durham Cathedral, surely an ideal “English” organ for this repertoire.

Most pieces are short: processionals, meditations, elegies, voluntaries, etc, but the fantasies on traditional melodies and the one sonata are larger in scale. Harrison & Harrison’s ‘flagship’ cathedral organ is ideal – a perfect vehicle for this music, and John Henderson’s notes are particularly interesting.