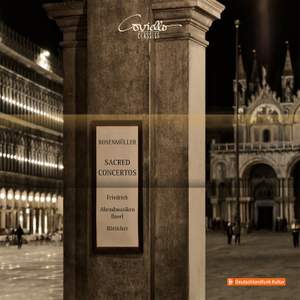 Johann Rosernumuller shaped German Choral music in the second half of the seventeenth century like hardly anyone else, and in particular influenced the development of sacred choral music. This apparently happened in his Venetian exile as well, for the majority of the sacred concertos for bass and instruments recorded here demand a rather unusual accompaniment of five string voices (compared to the Venetian music-making practice of that time). This indicates that they were written from the outset for German clients. The Ensemble Abendmusiken Basel presents here some of these coveted 'export articles'.