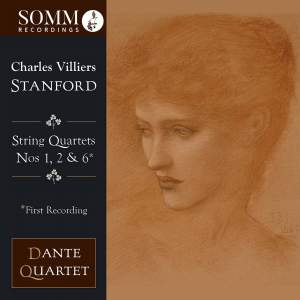 SOMM Recordings historic complete survey of Charles Villiers Stanfords String Quartets by the Dante Quartet reaches its end with a third volume focusing on Nos. 1 and 2, and the first recording of No. 6. Already acclaimed as a composer of choral music, Stanford came relatively late to the string quartet form, composing his first two at the age of 39 in 1891. Six more followed over the next three decades, including the Op. 122 String Quartet, No. 6 in 1910. This final volume features the early String Quartets, Opp. 44 (No. 1) and 45 (No. 2) which share a concern for meticulous use of individual instrument voices and a leaning towards lyricism. Allusions to Beethoven and Mozart are contained within Stanfords own beautifully crafted music. Heard here in its premiere recording, the Sixth String Quartet is a work of rich contrasts, restless energy and some of Stanfords most expressive writing for the medium. Authoritative booklet notes are provided by Stanford expert, Jeremy Dibble.