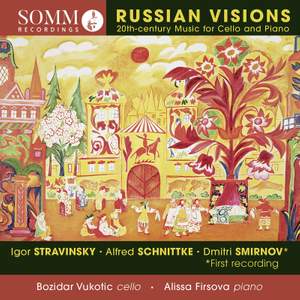 20th-century Music for Cello and Piano

Vukotic’s excellent sense of togetherness with Firsova shines in many of the responses in Stravinsky’s Pulcinella-derived Suite Italienne and the neat end of Schnittke’s Musica nostalgica. — BBC Music Magazine, April 2020, 3 out of 5 stars More…

Cellist Bozidar Vukotic and pianist Alissa Firsova make their debuts on SOMM Recordings with Russian Visions, a revealing survey of chamber duets by three 20th-century giants: Stravinsky, Schnittke and Dmitri Smirnov. Five contrasting works reveal the diversity of stylistic approaches in modern Russian music while also paying tribute to the countrys revered school of cello playing in pieces dedicated to legendary Russian cellists of the last century Gregor Piatigorsky, Natalia Gutman and Mstislav Rostropovich. The modernism of Schnittkes Second Cello Sonata is heard alongside the romantic lyricism of his First Sonata and Smirnovs Tiriel, and against the neo-classical leanings of Stravinskys Suite Italienne and Schnittkes Musica nostalgica. Heard here in its first recording, Dmitri Smirnovs Tiriel one of many pieces inspired by the artist William Blake was drawn from his similarly titled 1985 opera and takes the form of a lilting, lyrical lullaby welcoming the release from sorrow afforded by sleep.

Vukotic’s excellent sense of togetherness with Firsova shines in many of the responses in Stravinsky’s Pulcinella-derived Suite Italienne and the neat end of Schnittke’s Musica nostalgica.

Their programme trades on fractured nostalgia as much as Stygian gloom. Part of it is even jolly...Old Schnittke hands will find greater depth and moment in Natalia Gutman’s various accounts of the First Cello Sonata...Their recital conveys the impression of an intimate lunchtime event, the piano set well back in the comfortable acoustic of the Menuhin Hall.