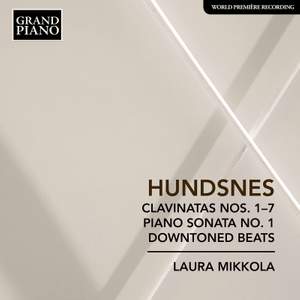 I. Cymbal Prelude and Distant Groove

SVEIN HUNDSNES is one of Norway’s most important living composers. He has written a wide-ranging body of music encompassing several vivid styles, moving seamlessly from tonal and non-tonal music to include jazz, rock and even funk. Hundsnes’ sequence of Clavinatas – one-movement free-standing pieces with a symmetrical form that often include toccata-like vitality – embody qualities that make his music so distinctive. Often syncopated, they possess short motifs, intensity and emotional ambiguity. Piano Sonata No. 1 and Downtoned Beats reflect his delight in drama and dance grooves.