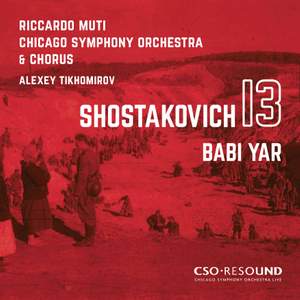 The tone virtually throughout is dark and intense, most particularly the opening movement which sets the title poem…Muti confirms his identification with this work in its subsequent movements…Tikhomirov,... — BBC Music Magazine, April 2020, 5 out of 5 stars More…

III. In the Store. Adagio (Live)

The ensemble shines throughout - from passages requiring the sheer sonic force of the first movement to the indelible moments provided by single instruments. Muti and musicians expertly navigate the intricacies of the five movements, each set to the poetry of Yevgeny Yevtushenko and expressing themes that were dear to Shostakovich - revolution and war, the individual’s role in society, idealism in the face of easy compromise, prejudice and intolerance.

Yevtushenko said, “Over people like Shostakovich death has no power. His music will sound as long as humankind exists... When I wrote ‘Babi Yar,’ there was no monument there. Now there is a monument.”

“Muti channeled that excitement into rapt, almost reverent attention with a searing performance of a dramatic work that is very close to his heart.” - Chicago Sun-Times

“In all, a probing performance of a work Muti rightly termed ‘a masterpiece.’” - Chicago Tribune

“Alexey Tikhomirov was a supremely responsive advocate throughout, singing with a flexible, middle-weight bass. The Russian singer was a firm, stentorian presence in the declamatory passages without crossing the line to mere hectoring.” - Chicago Classical Review

“The work ‘will remain eternal not only because it’s a great piece of music,’ Muti told the audience, ‘but because it’s a deep warning, a document that’s important for us and the next generation...’” - Chicago Tribune

The tone virtually throughout is dark and intense, most particularly the opening movement which sets the title poem…Muti confirms his identification with this work in its subsequent movements…Tikhomirov, rich-toned and sentient throughout, is backed by a superbly characterful Chicago Symphony Chorus.

The CSO plays with the kind of virtuosity that Petrenko’s account, however eloquent, doesn’t come close to matching, and the men of the Chicago Symphony Chorus are exceptional for power and expression—they sound like the very heart of protest and anguish. Recommended without reservation.

There are American ensembles with a more sustained Shostakovich tradition than the Chicago Symphony but the present recording, taken from the opening concerts of the orchestra’s 2018-19 season, can stand comparison with any of its distinguished predecessors, however different in tone...Strongly recommended.