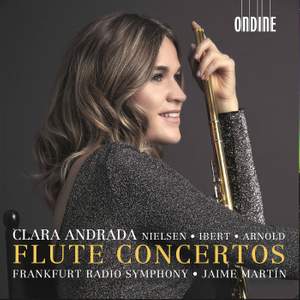 For fluidity, nimble attack, breath control and range of colours she really takes some beating. Teamed with Spanish conductor Jaime Martin, a past flautist himself, she dazzles most brightly... — BBC Music Magazine, April 2020, 4 out of 5 stars (Performance) / 3 out of 5 stars (Recording) More…

In this album Clara Andrada, solo flutist of the Frankfurt Radio Symphony, performs three 20th century flute concertos together with the orchestra conducted by Jaime Martín. Malcolm Arnold’s delightful Flute Concerto No. 1 makes a pleasant addition alongside Nielsen’s and Ibert’s flute concertos. Jaime Martín, himself an excellent flutist, is a perfect companion to these works. This is the orchestra’s second album for Ondine, and continues the fruitful collaboration between Jaime Martín and Ondine that has already produced three albums previously.

For fluidity, nimble attack, breath control and range of colours she really takes some beating. Teamed with Spanish conductor Jaime Martin, a past flautist himself, she dazzles most brightly in the strongest by far of these 20th-century concertos: Nielsen’s mercurial creation of 1926…There’s always golden gambolling from a flautist of the top rank.

Competition abounds in Nielsen’s Flute Concerto of 1926 but Andrada is totally inside the unsettled, quixotic nature of the music and communicates lyrical passages with ardent conviction. Jaime Martín, himself a distinguished flautist, provides lithe and vibrant accompaniment in both the Nielsen and Ibert concertos, while Andrada herself directs the strings with impressive authority in the Arnold concerto.