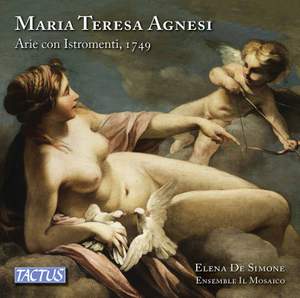 The mezzo-soprano Elena De Simone and the Ensemble Il Mosaico are the interpreters of this production that continues the journey of Tactus in the precious rediscovery of various female characters forgotten by history, that played a fundamental role in the cultural and musical panorama of their time. One of these cases concerns the Milanese Maria Teresa Agnesi, a precocious musician and composer - she starts writing music and performing in the academies of her city already at an early age - who dedicated her works to the major political authorities of her world.The 'Arie con Istromenti' dated 1749 are in fact dedicated to His Royal Highness Maria Antonia Walpurgis Symphorosa, wife of the heir to the throne of Saxony, educated and enlightened (both she and her husband were part of the Accademia Romana d'Arcadia), that deeply admired the work, thanking Agnesi on a letter with a heartfelt praise for the compositions.