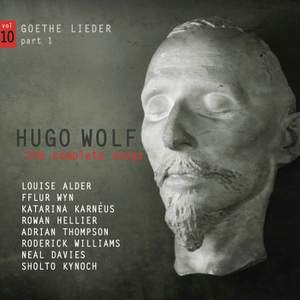 This disc is the penultimate release in Oxford Lieder’s complete Hugo Wolf song series – the first ever complete recording of Hugo Wolf’s songs. It features the first half of Wolf’s incredible Goethe settings, performed by three former finalists of the Cardiff Singer of the World competition (Louise Alder – Audience Prize Winner 2017; Katarina Karnéus – Winner 1995; and Neal Davies – Lieder Prize 1991) along with four equally renowned Lieder singers: Fflur Wyn; Rowan Hellier; Adrian Thompson; and Roderick Williams. They are joined by the Artistic Director of Oxford Lieder, Sholto Kynoch, at the piano. Recorded live at the Oxford Lieder Festival in the beautiful acoustics of Oxford’s Holywell Music Room, this recording brilliantly captures the drama of these extraordinary songs.