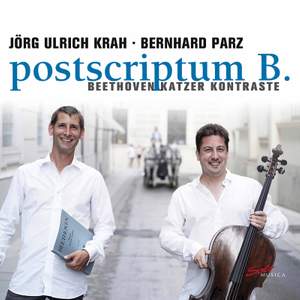 The release of the present double CD is the culmination of a festive project to mark the anniversary year of 2020, in which the music world (and not only the music world) will be commemorating the 250th birthday of Ludwig van Beethoven. The year also marks 85 years since the birth of the renowned German composer Georg Katzer. The cellist Jörg Ulrich Krah had the idea that a contemporary colleague should express his thoughts on Beethoven in his own personal way, thereby creating an exciting bridge between Beethoven and the 21st century. Krah and Bernhard Parz began working on the cello sonatas as early as 2015 at a performers’ symposium, and it was through friendly contact with Katzer that in 2017 the latter composed his three “postscriptum zu B.” pieces, which were duly performed several times at concerts by the two musicians.