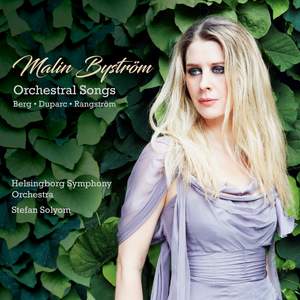 Malin Byström is a Swedish soprano, trained at the University College of Opera in Stockholm. She has been coached by Jonathan Morris since 1997 and collaborates with him, still to this day. In 2016 Malin Byström received the Litteris et Artibus medal and in 2018 she was appointed Hovsågerska (Court Singer) by H.M. the King. She was named Female Singer of the Year in the 2018 International Opera Awards. This is Malin's debut album (solo) with orchestral songs by Ture Rangström, Austrian Alban Berg and Duparc. Recorded(2019) together with HSO under the direction of the chief conductor Stefan Solyom.