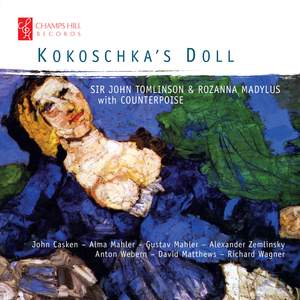 A thrilling exploration of the world of Alma Mahler; works, both old and new, are infused with the emotional toxicity of her affair with Oskar Kokoschka. — BBC Music Magazine, June 2020, 5 out of 5 stars More…

Wagner: Träume (No. 5 from Wesendonck-Lieder)

The Art of Love a song sequence from Alma Mahler prepares us for the emotional storms of contemporary composer John Casken's Kokoschka's Doll. Soprano Rozanna Madylus, together with brilliant chamber ensemble Counterpoise, sets the scene in songs by Alma Mahler, her first love and composition teacher Zemlinsky, and the man she married, Gustav Mahler, in new arrangements by composer David Matthews. Revered bass-baitone Sir John Tomlinson takes centre-stage for John Casken's Kokoschka's Doll, an extraordinary telling of the real-life story of Oskar Kokoschka's infatuation with Alma Mahler. More widely, Kokoschka's Doll explores the way women have been objectified sexually throughout history as models and muses, as objects rather than as real women (Oskar, a great Austrian painter, commissioned a life-size doll to help him come to terms with the end of his passionate and tempestuous relationship with Alma). The new libretto text, by John Casken and Barry Millington, draws on Oskar's letters and autobiography. In all, this release charts the life of Alma Mahler, a strikingly accomplished woman and composer who gave up her musical ambitions to marry Gustav Mahler, and who remained a muse and highly attractive inspiration to many others. Her early compositions are little-known gems which deserve much wider attention; this album release highlights her story.

A thrilling exploration of the world of Alma Mahler; works, both old and new, are infused with the emotional toxicity of her affair with Oskar Kokoschka.

Madylus is quite wonderful in The Art of Love, her mezzo warm, sensual and finely in tune with the heartbeat of the songs…[Tomlinson] is simply superb. With a vocal part marvellously written to some of his legendary strengths, he is charismatic, conjuring a quiet, intensely reflective mood in a performance that is marvellously crafted, beautifully enunciated and deeply expressive...Alma is yet to be the centre of her own story on the operatic stage. While we wait, this is strongly recommended.

Tomlinson’s bass lustre is powerfully combined with the atmospheric and pungent timbres of Counterpoise, featuring violin, trumpet, clarinet/saxophone and piano — a miniature orchestra in itself...a fascinating portrait of an extraordinary woman, time and place. For its ambition and general achievement, this is an album worth cheering.

Casken’s achievement is to make the quartet of violin (Fenella Humphreys), trumpet, saxophone (Kyle Horch) and piano sound like a much bigger ensemble, and to write in such a way that it feels of our time while catching the atmosphere of Schoenberg and Webern’s writing in the period of the affair it is describing. This a rewarding and fascinating disc, showing the best sort of curatorship.