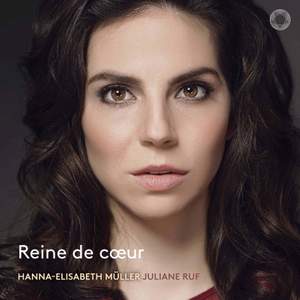 On her PENTATONE debut Reine de coeur, star soprano Hanna-Elisabeth Müller brings the German and French art song traditions together, focusing on song cycles by Robert Schumann, Alexander von Zemlinsky and Francis Poulenc, accompanied by pianist Juliane Ruf. The album presents a highly personal anthology of songs that address love and loss, and the heights and depths of the human soul. While Schumann’s Sechs Gesänge Op. 107 and Sechs Gedichte und Requiem Op. 90 offer the quintessence of the Romantic German Lied, Zemlinsky’s turn-of-the-century Walzer-Gesänge introduce the listener to a later and less well-known chapter in the genre’s history. Poulenc’s La courte paille and Fiançailles pour rire provide an atmospheric, at times humoristic complement to the Weltschmerz of the German songs.

Hanna-Elisabeth Müller is among the most celebrated young sopranos of our times. Reine de coeur is the first album of her exclusive collaboration with PENTATONE. She works together with her regular accompanist, pianist Juliane Ruf.