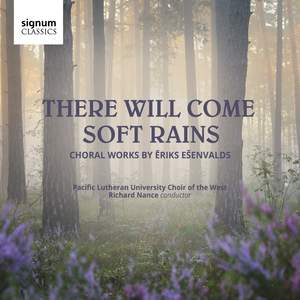 There Will Come Soft Rains

This varied, serene set of choral works only occasionally slips into schmaltzy territory. The choir shines when singing as an ensemble, bringing out Ešenvalds’s clever vocal techniques superbly. — BBC Music Magazine, March 2020, 3 out of 5 stars More…

Ešenvalds: There Will Come Soft Rains

Ešenvalds: Long Road: I love you night and day

Ešenvalds: O, She Doth Teach The Torches To Burn Bright

Ešenvalds: In My Little Picture Frame

Ešenvalds: My Luve Is Like A Red, Red Rose

The Choir of the West is the premier choral ensemble of the Department of Music at Pacific Lutheran University, located in Tacoma, Washington. The choir was founded in 1926 and was the third Lutheran college choir to tour extensively throughout the United States.

Choir of the West has toured to Europe, Scandinavia, Japan and China and has been selected to appear at several regional and national conferences of the National Association for Music Education and the American Choral Directors Association.

In November of 2015 the choir was a featured ensemble at the National Collegiate Choral Organization Conference, held in Portland, Oregon, performing with renowned conductor Simon Carrington.

During the summer of 2011 Choir of the West competed among choirs from 47 nations at the prestigious Harmonie Festival in Lindenholzhausen, Germany, winning two gold certificates and one silver. In 2015 the choir competed in the Anton Bruckner Choir Competition, held in Linz, Austria.

This record celebrates the music of Latvian composer Ēriks Ešenvalds. One of the most sought-after composers of today, Ešenvalds studied both in Latvia and the UK. He has had works premiered by the Boston Symphony Orchestra and the City of Birmingham Symphony Orchestra, winning him many awards.

This varied, serene set of choral works only occasionally slips into schmaltzy territory. The choir shines when singing as an ensemble, bringing out Ešenvalds’s clever vocal techniques superbly.

The Pacific Lutheran University Choir of the West is a superb ensemble that has toured nationally and internationally. Several of them have solos, at which they excel. These singers might be amateurs, but their work is consistently of professional quality. Richard Nance must be both an inspiring and detail-oriented director. This is a must-have, particularly for those who love choral music.

This new release can stand proudly against all rivals. Richard Nance has polished his Pacific Lutheran choristers to perfection. Balance and tuning are beyond reproach, with superb control of a full dynamic range. The soloists’ contributions are another great attraction.