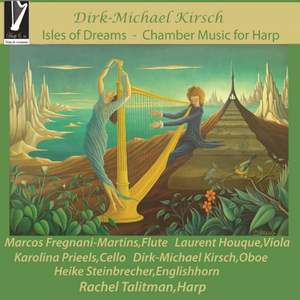 Kirsch: One Summer Day, Op. 9a

Dirk-Michael Kirsch studied oboe with Prof. Hagen Wangenheim at the Hochschule for Music in Munich and now lives in Munich where he works as a freelance oboist, teacher and composer. His performances as a professional musician and his engagement with contemporary music inspired him to begin composing, predominately for oboe in various ensemble settings. His work has been widely played and some of his solo oboe pieces (“Ganymed”, “Danse”) have been compulsory pieces at such music competitions as IDRS and ARD. Most of his compositions are published by ACCOLADE Musikverlag. Rachel Talitman created her independent label Harp&Co, aiming to instigate mainly first recording of the harp repertory. The discography of Rachel Talitman is varied and original, covering different unknown registers - concertos, chamber music and recitals, and many compositions dedicated to her.