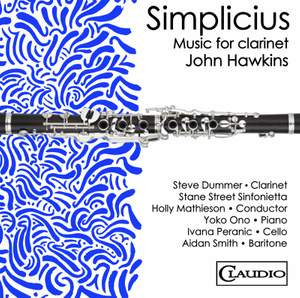 John Hawkins: The Dong with a Luminous Nose

This exciting new recording focuses on music featuring the clarinet written over a period of fifty years by UK composer John Hawkins. Beginning with the most recent (Simplicius Simplicissimus) the list works back to early pieces, including a virtuoso concerto for clarinet and string orchestra. As well as the orchestral works, the CD includes chamber music with both piano and cello. John Hawkins large-scale works include a trilogy about the sea including a Sea Symphony which had BBC broadcasts by both the Bournemouth Symphony Orchestra and the BBC Scottish Orchestra. Other BBC broadcasts have included Urizen for viola and piano, Variations for piano and This World for choir and two trumpets (BBC Singers). Soloist Steve Dummer, clarinet, was a student of the late, great Jack Brymer and now gives regular concerts throughout the UK and in sessions for radio and television. He is also a conductor and educator, as musical director of Kidenza, and founder and musical director of both Talkestra and Stane Street Sinfonietta. He is a regular tutor and conductor at Dartington International Summer School.