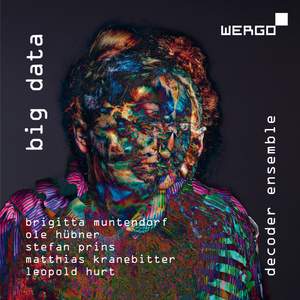 Muntendorf: Play Me Back and Forth

When it was first heard in 1962, Mauricio Kagel’s organ piece 'Improvisation ajoutée” created a scandal. The cause was clearly the sounds the organist and his two assistants were required to produce in addition to the sounds of the instrument – Big Data – the title reveals the defining themes of this recording! The Decoder Ensemble considers the possibilities and consequences of the limitless availability of media in the digital age. All of the pieces here focus in different ways on common contemporary practices like remixing, copying & pasting, sampling, and recycling. An involvement with these techniques is natural for the members of Decoder, three of whom are themselves composers. The group, founded in 2011, calls itself a 'band for contemporary music' and is actively involved in the newest musical developments and trends including electronics, computer techniques, multimedia, and elements of pop and rock music. The idea for this CD grew out of the group’s 'Big Data Weekend”. According to clarinetist Carola Schaal, this was a small festival 'organized in 2017 by the Decoder Ensemble for which the group commissioned eight works dealing with the theme of remix. We chose several of those works for this CD, as well as a piece by Brigitta Muntendorf that seems to us to fit perfectly with the others'.