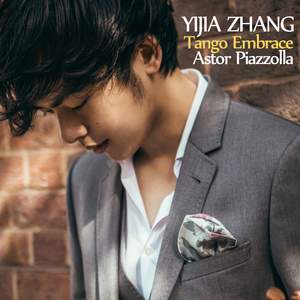 Recognized as a young rising star of the classical world, violinist Yijia Zhang’s debut album “Tango Embrace”, recorded in October 2015, is finally released onto the general market by Eito Music. Featuring nine classic tango pieces from Astor Piazzolla, Yijia’s interpretations are not only fresh, totally unique and inspirational, but also in keeping with the spirit of the great composer himself.

Yijia Zhang produced the album himself and the post-production was completed by mastering engineer Ray Staff at the London Air Studio, best known for his work with a diverse mix of artists including Led Zeppelin, The Rolling Stones and Muse.

“...elegantly lyrical tones... the one to watch” - The Independent.

Yijia Zhang was born and raised in China where he started to play the violin at the age of five, giving his first public performance when he was seven years old. Yijia was selected to be a member of the Asian Future Star Musicians group and made his western debut with the Cazadero Festival Orchestra in San Francisco, playing the Mendelssohn Violin Concerto, when he was seventeen.He received his Bachelor of Music from Mannes School of Music in New York and Master of Arts from Royal Academy of Music in London with Distinction and a Dip RAM certificate. Yijia has performed at the world’s leading concert halls such as Lincoln Centre, Carnegie Hall, Sydney Opera House, the LA Disney Hall and the Beijing Performing Arts Centre. He was member of various orchestras and ensembles including New York String Orchestra, YouTube symphony,

and he was the leader of Royal Academy Symphony and Opera, Good Ensemble London, and Castleton Festival Orchestra under Lorin Maazel. Continually searching for new creative mediums, Yijia is consistently striving for musical excellence and perfecting his unique style. Esteemed Russian violinist and conductor Maxim Vengerov recently remarked on Yijia’s playing, noting his “great potential.” Yijia’s goal is to continue to find the beauty in the encompassing of all musical styles with one foot firmly planted in the classical field and the other in the world of contemporary artistic expression.