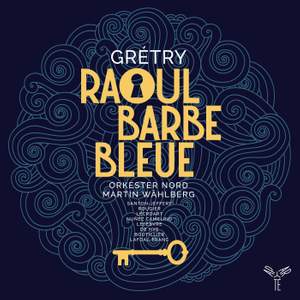 They do Grétry proud, with the ensemble’s playing first-rate and conductor Martin Wåhlberg maintaining consistently dynamic tempos. This is essentially an ensemble piece, and a capable company... — BBC Music Magazine, March 2020, More…

A collaboration of the Norwegian Music Festival Barokkfest and the Centre de musique baroque de Versailles. Premiered just a few months before the French Revolution and fallen into oblivion since, Raoul Barbe-bleue is an unclassifiable opéra comique whose musical and dramatic implications are so remarkable

that it even inspired Offenbach.

Marvellous and medieval universes meet in this drama based on Perrault’s tale that announces, both through its writing and its inherent horror, the upcoming

musical romanticism. Indeed, far from being an archetype of the genre, Raoul Barbe-bleue depicts a cruel gentry from a quite political point of view, that it

even dares to mock by mingling tragical register and comic effects, from travesty to the figure of the scapegoat valet.

supports the suspense and that cannot be compared to the naïve and simple early works of the composer. Indeed, Grétry’s musical refinement and elegance

serve the dramatic strength of his work and evokes Mozart’s Requiem introit.

Recorded in the beautiful theatre in Trondheim (Norway) with a brilliant cast under Martin Wahlberg’s direction, Raoul Barbe-bleue reveals a considerable

richness that will certainly strike both the neophyte and the specialist.

They do Grétry proud, with the ensemble’s playing first-rate and conductor Martin Wåhlberg maintaining consistently dynamic tempos. This is essentially an ensemble piece, and a capable company delivers it energetically – with no stars required.

With a well-chosen, largely Francophone cast and trim playing from the Norwegian period band there is plenty of tension in the more dramatic numbers. Martin Wåhlberg has a sure feeling for pacing and makes the most of the score’s instrumental colours...Both in song and spoken dialogue all the singers sound at ease in opéra comique. Chantal Santon-Jeffery is a radiant Isaure, shaping her music gracefully while mustering ample dramatic intensity in extremis.

Grétry’s music encompasses both the comic and darker elements of the piece with consummate skill…The recording…is chiefly notable for the committed direction and orchestral playing of the period-instrument Orkester Nord. Vocally the cast is dominated by the strong, authoritative Raul of the baritone Matthieu Lecroart, who manages to encompass the ambiguous complexity of the character while also letting out laughs a pantomime villain would be proud to own.

Colourful, bold and often touching, the language absorbs elements of Rameau, Gluck, even Mozart, and Wahlberg’s performance here, with Chantal Santon Jeffery, François Rougier and Matthieu Lécroart in the roles of Isaure, Vergy and Raoul, does the piece proud.