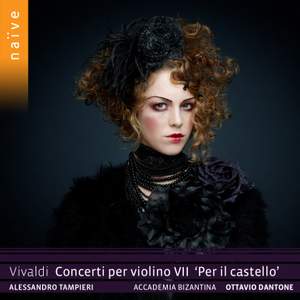 Vivaldi: Concerto in B minor for Violin RV389

This sixty-second volume of the epic Vivaldi Edition is also the seventh volume of the flamboyant Red Priest’s violin concertos. Here we see the ageing com-poser more full of life than ever, adapting to the de-mands of the galant style in vogue since 1725, while losing nothing of his verve and imagination.

These are the sole surviving concertos of the fifteen that, during his fateful last year in Viennese exile, Vivaldi sold for a pitifully small sum to Count Vinciguerra Tommaso Collalto, a Venetian nobleman then residing in his castle at Brtnice, Moravia (the ‘castello’ of this volume’s title).

With solo writing of extreme refinement, these works fully exploit the whole range of violinistic expression and phrasing, displaying a wealth of ornamentation and a lavishly inventive sense of lyrical cantabile virtuosity.

This enchanting recording is the eighth that Accademia Bizantina and their director Ottavio Dantone have made in the Vivaldi Edition so far. The soloist here, violinist Alessandro Tampieri, is already well- known to the Ravenna-based ensemble: he joined it at the age of only fifteen and has been their leader since 2011. He plays the violin, viola and viola d’amore with equal virtuosity, winning many critical plaudits in 2018 for his Vivaldi Edition recording with the same ensemble of the Concerti per viola d’amore.

These are late works representing a violinist’s treasure trove with their virtuoso inventiveness, huge range of articulation and phrasing, and frequently light and lucid galant textures. It’s all been beautifully brought off here, too. From Tampieri himself, there’s a slender suppleness that makes for a lovely feel of rhapsodic freedom, yet without ever messing with the solidity of Vivaldi’s trademark rhythmic certainty.