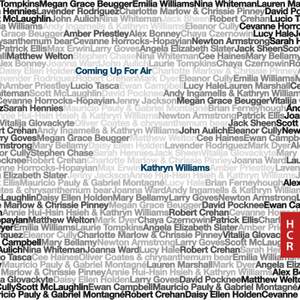 Coming Up For Air

Sheen, J: (It's Really You Strolling By)

Poem in a Single Breath

Priestley: It Involves Beautiful Tightropes of Logic on Which One Has to Walk

Mark Dyer: Memento for Kathryn (And Being Able to Hold That forever)

Lucy Hale: When We Breathe

Lavender Rodriguez: I Didn't Say That He Did

Robert Crehan: Save Your Breath

Hennies: Packing It In

For many composers—Bach, Handel and Mozart among them—the fact that woodwind players need to breathe from tme to tme appears to be an inconvenience, an unwanted interrupton to the long-flowing line, the contnuous stream of actvity. Breath breaks, becomes a barrier. But what if breathing itself was part of the music, rather than one of many hidden mechanisms that

make it happen? Flautst Kathryn Williams has faced chronic respiratory conditons which caused the connectons between her body, breath and musical expression to be severed. A successful sinus operaton in 2016 enabled her to resume her performance career and Coming Up For Air began as a response to her recovery. Kathryn was forced to approach her performances one breath at a tme, so single-breath pieces were able to demonstrate some of the ways she was able to sttch these relatonships back together. The result is an ever-growing body of work that has proven to be therapeutc, both musically and physically. This album collects 40 different responses to one straightorward queston: what can be communicated in a single breath? This

limitaton has inspired a wide range of approaches—some composers have contributed a melody, some have foregrounded a physiological challenge, others have offered a single sound, and others stll have created their own playful exceptons to the prompt. The contributons are from composers of all ages, backgrounds and levels of experience. The youngest composer