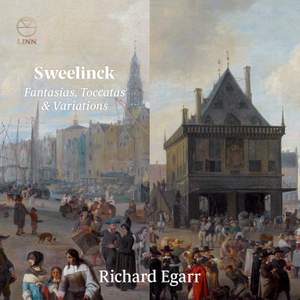 He hopes, he says, ‘to persuade you the listener of the glorious nature of this rich and wonderful music’. Mission accomplished. — Gramophone Magazine, February 2020

• Following his acclaimed Linn debut, One Byrde in Hande, Richard Egarr turns to the music of Jan Pieterszoon Sweelinck for his new recording of fantasias, toccatas and variations.

• As well as being a notable composer Sweelinck was a skilled improviser and keyboard virtuoso whose knowledge of the stylistic innovations of his English contemporaries, such as Byrd and Morley, was evident in his work.

• This is particularly evident in the famous Fantasia Crommatica, a highly improvisatory, boundary-pushing work that showcases many of Sweelinck’s innovations in keyboard composition.

• Within his lifetime Sweelinck was most celebrated for his variations on the popular tune Mein junges Leben hat ein Endt; Egarr relishes the intricate counterpoint which builds from the simple theme into a masterpiece of inexhaustible invention and limitless variety.

• A selection of fantasias and toccatas complete the programme in which Egarr’s passion for the harpsichord and Sweelinck’s music are enthusiastically conveyed.

He hopes, he says, ‘to persuade you the listener of the glorious nature of this rich and wonderful music’. Mission accomplished.