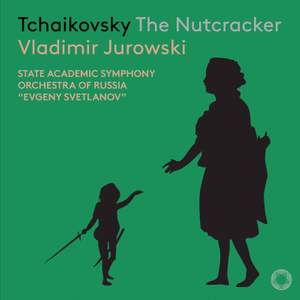 Jurowski delivers the pas de deux and final “Apotheosis” with glowing emotion and excitement. In the face of such a satisfying reading, it’s hard to imagine anything better. — Fanfare, March/April 2020 More…

No. 3, Children’s Gallop and Dance of the Parents (Live)

No. 4, Arrival of Drosselmeyer (Live)

No. 5, Scene and Grandfather Waltz (Live)

No. 6, Clara and the Nutcracker (Live)

No. 9, Waltz of the Snowflakes (Live)

No. 11, Clara and Nutcracker Prince (Live)

No. 12e, Divertissement. Dance of the Reed Flutes (Live)

No. 12f, Divertissement. Mother Ginger and the Polichinelles (Live)

No. 14a, Pas de deux. Sugar Plum Fairy and Her Cavalier (Live)

After the tremendous success of Swan Lake, Vladimir Jurowski and the State Academic Symphony Orchestra of Russia Evgeny Svetlanov continue their Tchaikovksy ballet series on PENTATONE with this recording of The Nutcracker. Tchaikovsky's enchanting masterpiece is an absolute audience favourite, thanks to hits such as the Waltz of the Flowers, Trepak and Dance of the Sugar Plum Fairy, but also due to the composer's ability to evoke a sense of wonder in listeners both young and old. Vladimir Jurowski and his players tell this story about the power of fantasy with unprecedented zeal, demonstrating the symphonic refinement and orchestral brilliance of Tchaikovsky's score.The Nutcracker offers the third PENTATONE release of the State Academic Symphony Orchestra of Russia Evgeny Svetlanov together with its Artistic Director Vladimir Jurowski, after Prokofiev Symphonies 2 & 3 (2017) and Swan Lake (2018).Jurowski has recorded extensively for PENTATONE and is generally seen as one of the most prominent conductors of his generation.

Jurowski delivers the pas de deux and final “Apotheosis” with glowing emotion and excitement. In the face of such a satisfying reading, it’s hard to imagine anything better.

A refined reading, as highly polished as a Fabergé egg. The State Academic Symphony Orchestra of Russia ‘Evgeny Svetlanov’ sounds far better disciplined than its older, more brazen days as the USSR State Symphony. There are times when I’d have welcomed a little more misbehaviour, but Jurowski is a strict master. Everything is neat as a pin in the dainty Overture and the March clips along tidily.

Throughout the inventiveness and brilliance of his orchestral imagination are dazzling.