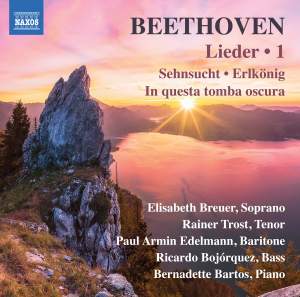 No. 1, Hoffnung. Allegretto moderato (I)

Beethovens contribution to the development of German song was significant he wrote some 90 songs but it has inevitably been overshadowed by his mastery of orchestral and instrumental music. Unlike Mozart and Schuberts works in the genre, little is known about the composition and performance of Beethovens songs, but he is known to have greatly respected Goethe, as his settings amply show, not least in the incidental music to Egmont, from which Freudvoll und leidvoll is taken.