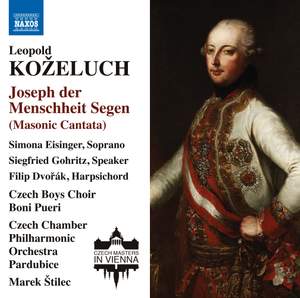 The stand-out performer on this CD is Eisinger and she is a singer to watch. To this reviewer’s ear, the pieces which show off the talent of Koželuch are undoubtedly the purely vocal numbers,... — Fanfare, May/June 2020 More…

Vienna was a magnet for musicians across Europe in the 18th century, and among the most successful and influential were composers from Bohemia. Credited with developing idiomatic piano performance in the city, Leopold Koeluch also wrote choral music of considerable individuality. Joseph der Menschheit Segen (Joseph, Mankinds Blessing) is a powerful Masonic cantata that unusually includes Melodrama, where spoken text is followed by instrumental passages. The two sacred arias are masterful compositions and the Missa in C, though small in scale, is unusually lavish in its scoring. Klage auf den Todt Marien Theresien (On the Death of Maria Theresa) possesses a grave and subtle beauty.

The stand-out performer on this CD is Eisinger and she is a singer to watch. To this reviewer’s ear, the pieces which show off the talent of Koželuch are undoubtedly the purely vocal numbers, which are superbly and effortlessly handled by our soprano. The sound is clear and balanced. Go on, give it a try!

The slightly breathy Czech boys’ choir sound suitably devotional and patriotic here (if intonation falls a little short above the stave) and in a Mass that packs the whole long text into under 12 minutes of music, rather in the manner of some of Haydn’s earliest Masses. The soprano Simona Eisinger is adequate both in the cantata and in a pair of sacred arias that avoid coloratura yet call for a wide tessitura and a good deal of stamina.