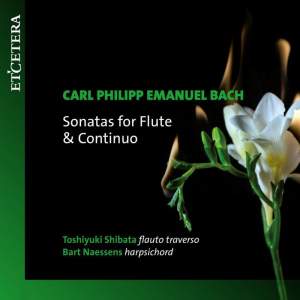 Flautist Toshiyuki Shibata says of this recording: “In contrast to Johann Sebastian Bach, who has been acclaimed as one of the greatest composers of all time, Bach’s second son Carl Philipp Emanuel Bach remains undervalued.

Yet he, too, left great musical assets on this planet. I began my career on the Boehm flute, so it wasn’t until I started studying the flauto traverso, in other

words, when I entered the world of early music, that I encountered the “jewels” that I recorded here. Belgium has long been a hotspot for early music;

the country has produced many pioneers and Brussels has become one of the central locations of the early music scene.

By a stroke of luck, a number of manuscripts by Carl Philipp Emanuel Bach happen to be kept in the collection of the music library of the Royal Conservatory

in Brussels. On this recording, I approached Carl Philipp as a pre-Romantic composer, as opposed to just one of baroque ones.

Considering the Empfindsamer Stil as the transitional bridge toward the Romantic era, rather than just one of the compositional styles of the late baroque,

enables us to capture Carl Philipp’s music more clearly. Of course, understanding the rhetoric and ornamentation of Carl Philipp’s works remains important, but I strongly believe that grasping the mission statement of the composer should take a more crucial role in the process of recreating his music. Robert Schumann wrote about Carl Phillip that “as a creative musician he remained very far behind his father.” I hope the revolutionary qualities of his compositions will prove Schumann wrong.”