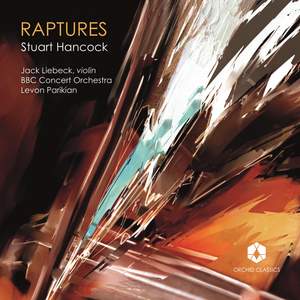 The central Andante [of the Violin Concerto] finds the violin duetting with various woodwind on the way to a rapturous culmination, then the final Allegro provides a welcome injection of energy... — Gramophone Magazine, February 2020 More…

In high demand as composer for film, television and the concert hall, Stuart Hancock has won admirers worldwide with music hallmarked by heartfelt romantic gestures, rousing tunes and opulent orchestrations. Raptures offers a compelling new survey of Hancock’s orchestral works, including world premiere recordings of his Violin Concerto, with Jack Liebeck as soloist, and two other magnificent pieces for full symphony orchestra. The British composer’s love for sumptuous Hollywood scoring flows through his album’s opening track, Variations on a Heroic Theme, a lion-hearted showcase for every instrument of the orchestra. The Orchid Classics recording trains the spotlight on the BBC Concert Orchestra, in outstanding form at the Watford Colosseum under the direction of Levon Parikian. Conductor and musicians bring out the rich tonal colours, atmospheric impressions and inventive brilliance of Raptures, originally conceived for string quartet and transformed for this recording into a five-movement symphonic suite. A quick glance at Stuart Hancock’s biography reveals the striking breadth of his work. His credits include everything from the score to BBC1’s primetime fantasy drama Atlantis to the BASCA British Composer Award-winning Snapshot Songs, a pioneering project for orchestra, choir and soloists. Raptures underlines his status as one of today’s most versatile and engaging composers.

The central Andante [of the Violin Concerto] finds the violin duetting with various woodwind on the way to a rapturous culmination, then the final Allegro provides a welcome injection of energy which Jack Liebeck savours right through to the effervescent closing bars...[Variations on a Heroic Theme] certainly provides an apt showcase for the BBC Concert Orchestra, sounding at or near its best under the assured direction of Levon Parikian.