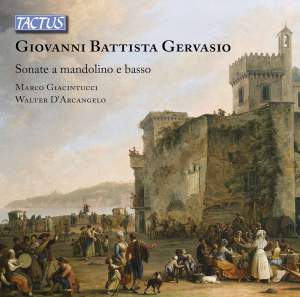 I. Allegro a suo comodo

Giovanni Battista Gervasio was a significant personality in the musical scene of ‘stile galante’ of the second half of 18th century; composer, virtuoso and teacher, he studied and improved the four-strings mandolin, which was first built in Naples in that period. Thanks to him this instrument became popular and technically refined as it is nowadays. The aim of this recording is to reproduce the tinkling sonorities of these compositions. In order to obtain thoroughly this particular natural sonority, we have decided to 'capture' the natural reverberations of the environment without ignoring the sound of each single instrument, so that the phrasing is intelligible. This is the first complete recording of all the sonatas for mandolin by Giovanni Battista Gervasio and the first absolute recording.