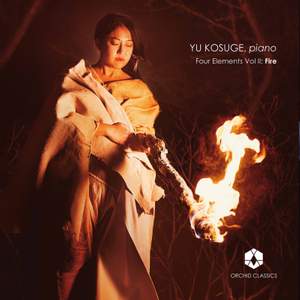 Round Dance of the Princesses

Infernal Dance of All Kastchei’s Subjects

Prometheus defied the gods to steal fire and give it to humanity. The ancient titan’s priceless gift, used since for good and ill, has never lost its fascination. Yo Kosuge, praised for her immaculate technique and penetrating artistry, explores creative responses to fire in the second volume of her Four Elements project. The Berlin-based Japanese pianist’s latest Orchid Classics album moves from pieces filled with nostalgic warmth to others animated by hell’s tormenting flames. “By showing these many different aspects of fire, I want to lead the listener through different stories as told by composers, from the Romantic to contemporary periods,” comments Yu Kosuge. Four Elements: Fire is built around compositions written during the First World War, each hallmarked by harmonic daring and searing emotions. Its tracklist includes a selection of Max Reger’s sublime Träume am Kamin, fireside dreams preserved in the form of musical miniatures; Vers la flamme, among Alexander Scriabin’s final compositions and one his most intense; Debussy’s breathtaking Feux d’artifice, a pyrotechnic tour de force; and the Ritual Fire Dance from Manuel de Falla’s ballet El amor brujo.