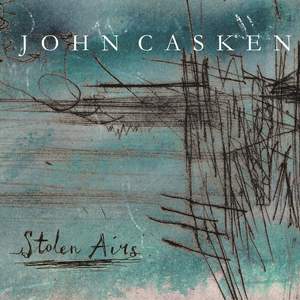 The performers are some of the cream of the younger generation, and as such it is difficult to imagine finer performances than these...This is a terrific, well-filled disc, and one that should... — Fanfare, September/October 2020 More…

I. Shadowed by the Blackened Tree

IV. ...By a Quickening Moon

VI. ...By the Harrowed Land

Stolen Airs' is a collection of chamber works featuring piano works by the eminent British composer John Casken, performed by various artists including the Gould Trio and Kenneth Hamiton. This is a release with strong Mancunian connections as John was professor of music at the university for many years.

The idea of creating a CD of his chamber music in which the piano features in every piece (although a piece for solo piano is hardly chamber music) was the composers initial thought, and the range of pieces from 2002 (Piano Trio) to 2008 (Shadowed Pieces), to three more recent pieces featuring cello and then horn, as well as solo piano, created not only a nice sequence but also an interesting variety. The recordings took place in Cardiff University School of Music and at The University of Manchester in the Cosmo Rodewald Concert Hall, in which John Casken played a major role in creating nearly 20 years ago.

The performers are some of the cream of the younger generation, and as such it is difficult to imagine finer performances than these...This is a terrific, well-filled disc, and one that should bring Casken more into the spotlight; he deserves to be there.

Stolen Airs, for cello (Philip Higham) and piano (Alasdair Beatson), makes a superb, haunting single-movement sonata. Serpents of Wisdom is an impressive invention for horn (Alec Frank-Gemmill) and piano; and Casken’s Piano Trio is a powerful paraphrase of his Tolstoyan opera, God’s Liar.