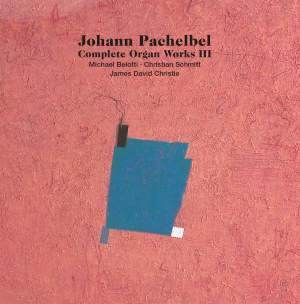 Our new complete recording of the organ works of Johann Pachelbel, the most important composer of the Southern German organ tradition, concludes with a total of three CDs – all of them once again in surround sound and with first-class organists performing on selected organs. Our three protagonists, Michael Belotti, Christian Schmitt, and James David Christie, have produced enthralling recordings on which they demonstrate their expertise in performances on various outstanding historical instruments. This final volume of our complete edition adheres to the same policy as Vols. 1 and 2: it too is based on the new collection and edition of the composer’s extant oeuvre. The order of the works on the recordings initially follows that of the chorale arrangements in the edition, which results in programs with the following thematic emphases: Passions, Psalm Settings, and Chorale Partitas. The new recording invites all listeners to rediscover the mastery and versatility of the keyboard composer Pachelbel.