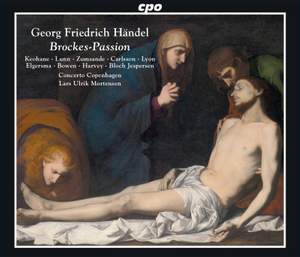 No. 4a, Und bald hernach

No. 8a, Aufs wenigste will ich

No. 10a, Die Pein vermehrte sich

No. 15a, Steck nur das Schwert an seinen Ort

No. 19a, Drauf krähete der Hahn

No. 25a, O, was hab' ich verfluchter Mensch getan

No. 29a, Pilatus wunderte sich sehr

No. 31b, Ich seh' an einen Stein gebunden

No. 45a, Und eine dicke Finsternis

The Concerto Copenhagen is Scandinavia’s most renowned Baroque ensemble and one of the most innovative such formations worldwide. Its trademarks are its unusual program combinations featuring Scandinavian rarities and famous Baroque masterpieces. This world-class orchestra now turns to Handel’s great Brockes-Passion in a CD recording based on the Halle edition of this composer’s works. The Passion text published by the well-to-do Hamburg resident Barthold Heinrich Brockes was a literary bestseller during the early eighteenth century. Composers set his poetic text, the first to add narrative elements to the Biblical Passion texts, more than thirty times.Today the best-known of these compositions is the one by George Frideric Handel, who set these verses to music in 1716, creating what would remain his only sacred work in German. Stylistically, however, the Brockes-Passion prefers to follow Italian models and speaks a musical language resembling that of the Baroque opera.

Lars Ulrik Mortensen gets eager, alert playing from his trim band, while his solo team is uniformly strong...Peter Harvey is a sympathetic Jesus...no Handel lover who buys the excellent Mortensen recording will feel short-changed.