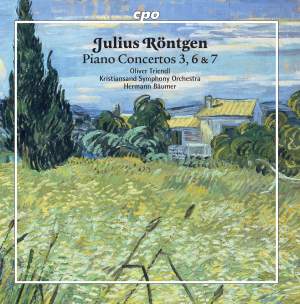 This is the first recording of these three piano concertos and the event is fortunate to be in the hands of these musicians and CPO’s engineers. — MusicWeb International, November 2019

Our second CD featuring piano concertos by Julius Röntgen presents impressive Romantic music by this composer who was also an outstanding pianist and often interpreted his own compositions. His Piano Concerto No.3 of 1887-88, by way of exception in four movements, is more reminiscent of Brahms and not at all of the New German School of Liszt adherents. In December 1929 Röntgen began composing his last two piano concertos, both of which are heard on this CD. His Concerto No. 6 has one movement and lasts a mere fifteen minutes. The theme consists of repeated gentle wavy motion that recurs at the beginning, in the middle, with the cadenza, and at the end and reflects the bitonality so diligently practiced by Willem Pijper and Paul Hindemith, two composers whom Röntgen held in admiration. His Concerto No. 7, his last such work, has three distinct movements and an ABA structure that would enable it to stand alone. It is Röntgen’s posthumous triumph that his two last concertos have never disappeared from the repertoire and have continued to be regularly performed together.

This is the first recording of these three piano concertos and the event is fortunate to be in the hands of these musicians and CPO’s engineers.