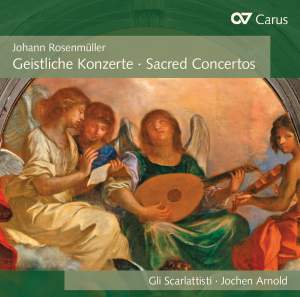 For the 400th birthday of Johann Rosenmüller, the soloists’ ensemble Gli Scarlattisti under the direction of Jochen Arnold presents a selection from the collection of so-called “Kernsprüche.”

These sacred concertos, most of which are unknown today, are characterised by a particularly charming versatility in the interplay of the various vocal and instrumental parts. In their day, they were similarly considered to be as stylistically influential as Schutz’s “Kleine Geistliche Konzerte.”

How good it is that the musicians, with their numerous first recordings, have rescued this collection from oblivion.