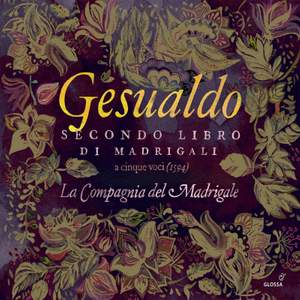 It seems to me that they have taken time to properly hit their stride, but here they rediscover the heights scaled with Claudio Cavina at the helm. These are near-flawless readings, effortlessly... — Gramophone Magazine, January 2020 More…

No. 4, In più leggiadro velo

The Second Book of Madrigals of Carlo Gesualdo provides the focal point for the latest in La Compagnia del Madrigale’s stunning reappraisals of the glories of the Italian madrigal on Glossa.

Probably written by Gesualdo between the time of the double honour killing of his first wife and her lover and his subsequent remarriage, the second book presents a sophisticated compositional mastery quite in keeping with the later books, albeit offering a calmer and gentler approach compared to the more tortured and twisted musical and psychological turns found in the last books.

Notwithstanding, much is required from the singers on the Secondo libro di madrigali a cinque voci and La Compagnia del Madrigale bring their muchpraised sensitivity to the text, balance of ensemble and dynamic control.

In the booklet, both Marco Bizzarini and Giuseppe Maletto investigate the state of mind of this fascinating composer, over four centuries since his death. The substantial second part to this recording offers a set of contrasts with Book 2: nine tracks devoted to madrigalists inspired by Gesualdo’s style, from contemporaries in Nenna, Macque and Palazzotto Tagliavia to the later Sigismondo d’India. A veritable bonus.

It seems to me that they have taken time to properly hit their stride, but here they rediscover the heights scaled with Claudio Cavina at the helm. These are near-flawless readings, effortlessly poised and formally legible. Their responses to textual and musical cues are never overdrawn but subtle and even humorous.