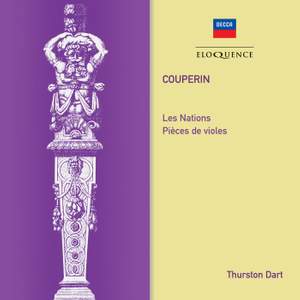 Thurston Dart was behind these recordings, yet the performance style, with violin vibrato in Les Nations, now appears dated. The Pièces de violes fare better, but the sound is restricted. — BBC Music Magazine, March 2020, 2 out of 5 stars

Three L’Oiseau-Lyre albums of chamber music by Couperin, newly remastered and compiled together for the first time, including material new to CD.

During the past half-century, Francois Couperin ‘the Great’ has indeed come to be regarded among the great European composers. Where once he was dismissed with faint praise as the confector of trifles to amuse the Sun-King and his court, we now see him more in the round, balancing devotional psalms with bitingly observant galleries of men and women from high and low stations, as keenly interested in the view from his Parisian window as the glitter of Versailles.

Dart and his colleagues recorded the pair of ‘Suites de violes’ in 1957, the scores having only been rediscovered around 40 years previously, but they were enthusiastically promoted by the musicologist Wilfred Mellers, who declared them to stand as a highlight of Couperin’s chamber music. This album supports the contention of H. C. Robbins Landon, writing about Les Nations in 1973: ‘Unlike many musicologists, who are poor performers, Dart was a wizard at any keyboard. He was also an excellent director, as the present records attest’. Landon singles out his

immaculately crisp rhythmic sense for special praise, as well as his scholarly attention to ornamentation, without which the French Baroque idiom soon dies.

Couperin’s cosmopolitan nature is nowhere more evident than in the four-volume collection of Les Nations, published in 1726 but composed during the previous 35 years. French and Italian styles mingle freely in these suites for trio-sonata ensemble. Made in London and 1958 and 1962, this was their first complete recording, and it was welcomed by critics as displaying all the facets of Couperin’s masterly contrapuntal writing with easy authority, and in an ensemble of two violins accompanied by a continuo of harpsichord and viola da gamba that would have been familiar to Couperin himself. In a 1965 interview, the director of L’Oiseau-Lyre was proud to point out that Dart and Marriner had spent two years editing the score of Les Nations for this recording.

‘Dupré plays sensitively, and is fluent and convincing in ornamentation. Dennis Nesbitt … plays his part firmly but never too obtrusively … the harpsichord [is] here played with style and refinement by Thurston Dart.’ Gramophone, July 1958 (Pièces de violes)

‘This further instalment of Couperin’s chamber music by the Jacobean Ensemble is distinguished by the finesse of playing and a sense of style that is all too rare in modern recordings … The individual character of these pieces emerges vividly and naturally, and will surely give pleasure to all connoisseurs of French music.’ Gramophone, November 1962 (Les Nations)

Thurston Dart was behind these recordings, yet the performance style, with violin vibrato in Les Nations, now appears dated. The Pièces de violes fare better, but the sound is restricted.