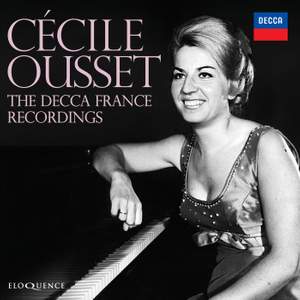 No.2 Prélude in C sharp minor

The early recordings of a keyboard lioness, long unavailable and new to CD.

Not generally given to extravagant effusions, William Glock (Controller of Radio 3 and the BBC Proms in the 1970s) had no doubt: ‘There is no one who plays the piano better in the world than she does. There is no one with a more fantastic command of the piano … not over felt, not under-felt, nothing rushed just to show off and yet the greatest playing I’ve heard for years’.

He was referring to the French pianist Cécile Ousset, whose career had belatedly sparked to life and international recognition with appearances across the UK and US and a new contract with EMI Records. Yet prior to this Ousset had made several recordings since her success in the late 1950s at several major European competitions. She accumulated a considerable catalogue on Eterna, the East German label, but then Ousset signed to make recordings with Sofrason, the Société Française du Son. These were licensed for wider release by the French arm of Decca, but Sofrason went out of business in 1981 and the recordings have never been reissued – until now. This new Eloquence set includes an appreciation of Ousset’s art by the French pianophile Jean-Charles Hoffélé.

These ‘French Decca’ recordings all date from 1971–76, and they include much solo repertoire that Ousset never recorded again, though they share similar qualities with the much-acclaimed concerto recordings that she made in the 1980s: an unsentimental palette of rubato and tone-colour, a fearless and brilliant command of articulation, and a uniquely French mastery of jeu perlé.

The first album made an imaginative and attractive compilation of fin-de-siècle Parisians from Saint-Saëns to Satie. The second displayed her particular affinity with the Russian post-Romantics, Rachmaninov and Prokofiev; and the third coupled two landmarks of German-Romantic piano literature, by Brahms and Schumann. These all received a later international LP issue on the ‘Ace of Diamonds’ imprint and to very warm reviews.

However, Ousset’s last recordings from this period encompassed the complete variations of Beethoven, issued by French Decca in two volumes (a 3LP and a 2LP box). Its disappearance particularly dismayed Ousset herself: ‘I made a big effort on that one,’ she remarked in a 1984 interview, ‘and it came off beautifully’.

‘Ousset has exactly the sort of glitteringly virtuosic technique, as well as the unflagging energy, which [these pieces] demand. Her playing is vividly recorded, giving an effect of real immediacy.’ Gramophone, January 1980 (French recital)

‘Ousset’s performance is vital and assured, grandly shaped where grandeur is in place, capable of brilliance and a certain cool aggression, tonally apt. In eschewing unnecessary colouring she never starves the music of tone.’ Gramophone, August 1975 (Brahms/Schumann)

The four Beethoven variations discs alone justify purchase of this set. The remaining three discs survey, respectively, French, Russian, and German repertoire. And in each case, Ousset is masterful in surmounting the wide and varied range of technical and interpretive challenges. All of these marvelous performances are captured in beautiful analog sound—rich, colorful, detailed, set in a realistic concert hall acoustic.