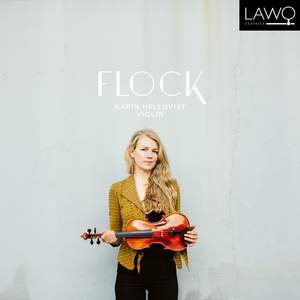 The soundworld of the violin and of electronic music may not be as far apart as one would immediately think. When composer and radio engineer Pierre Schaeffer stated in the middle of the 20th century that sound recording and speakers created a new listening situation by detaching the sound from the sound source, he alluded to the ancient mathematician Pythagoras.

The latter experimented with lecturing for his students behind a curtain, because he wanted them to listen more attentively to what he was saying. This

was the same Pythagoras who also demonstrated how the length of a string is in proportion to the pitches that the string can produce. At the same time,

the meeting between a violin and electronic sounds points toward oppositions that have structured our Western selfunderstanding: tradition vs. innovation,

material vs. immaterial, history vs. present, nature vs. science.

The works of this recording explore, accentuate, attack, and erase these contradictions between the violin sound and electronic sound in various ways. Karin

Hellqvist performs internationally as an interpreter of contemporary music.

Through collaboration and dialogue, her work examines, realizes, and contributes to the process of creating new music.

Hellqvist is a member of several leading ensembles in contemporary music throughout Scandinavia, such as Cikada, Oslo Sinfonietta, Ensemble neoN,

and Duo Hellqvist/Amaral and she is a frequent guest performer in major international arenas for contemporary and experimental music. Her performances

have been broadcast internationally and she has contributed to several award-winning recordings. She was educated at the Royal College of Music in

Stockholm, Universität der Künste Berlin, the Norwegian Academy of Music in Oslo, and at the Royal College of Music London, where she graduated with an

Artist Diploma in Performance in 2011. In 2016 she received the Interpreter’s Prize from the Swedish Society of Composers. She is currently a PhD research fellow at the Norwegian Academy of Music.