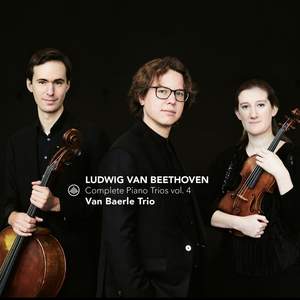 From the very opening notes of the piano at the beginning of the disc it is immediately clear that this is going to be an exceptional recording. It has all three of the essential characteristics... — Fanfare, May/June 2020 More…

The fourth volume in the ongoing and successful series of Beethoven’s piano trios by the Van Baerle Trio. The greatest of Beethoven’s trios, the Archduke, is accompanied by lesser-known works, which makes for an

exhaustive picture of the composer’s approach to the medium throughout his life.

Beethoven’s most famous piano trio is dedicated to the Archduke Rudolph, himself an accomplished musician. The importance of Rudolph as a patron can be seen in the number of other prominent works that Beethoven dedicated to him. Beethoven started work on the trio in the second half of 1810, but much of the work was done in March of the next year. Some descriptions give an inkling of how novel a composition this was perceived to be, and a young Ignaz Moscheles reported: “In the case of how many compositions is the word ‘new’ misapplied! But never in Beethoven’s, and least of all in this, which again is full of originality.”

A year after the Archduke, Beethoven wrote another piano trio in B-flat major. The autograph dates it as 26 June 1812, but besides the similarity in key it is different in every way. It consists of a single movement, was not published during the composer’s lifetime, and was written to encourage the nine-year-old Maximiliane Brentano in her piano playing.

The Trio in E-flat WoO 38 might have been once intended to be part of op. 1 and although there are no extant sketches to support this, the style of the composition makes a dating of around 1790-1 plausible. The trio contains some surprising twists and turns, particularly in its lengthy codas.

The last piece for piano trio that Beethoven published during his lifetime has one of the longest compositional histories of all of his works. It consists of a long introduction, followed by ten variations on ‘Ich bin der Schneider Kakadu’ from Wilhelm Muller’s popular opera Die Schwestern von Prag. The first version of this piece was probably composed between 1801 and 1803, but it was substantially revised in 1816, and most likely further revised before publication in 1824. This final trio therefore includes elements from Beethoven’s early, middle, and late styles.

From the very opening notes of the piano at the beginning of the disc it is immediately clear that this is going to be an exceptional recording. It has all three of the essential characteristics of any great chamber music recording: a palpable sense of the space; immediacy and detail evenly discernible across a soundstage perfectly created in three dimensions in front of you; and the faithful reproduction of the warmth and tonal beauty of the instruments themselves.

One of the most engaging qualities of the Van Baerle Trio’s Beethoven cycle has been its feeling of intimacy – of three players, each with an attractive sound, playing together with a sense of something understood...after a rewarding journey through the smaller peaks and vales, they now reach the final summit of the Archduke, and I’m pleased to say that they haven’t let the altitude go to their heads.