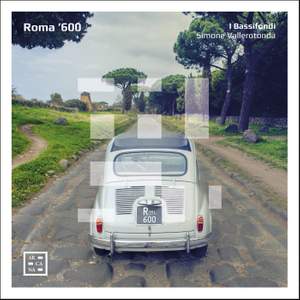 A journey through seventeenth-century Rome, the rough and magnificent city where Caravaggio and Stradella lived. Strict counterpoint and learned polyphony in the lute and keyboard pieces by Kapsberger, Pasquini and Frescobaldi mingle with light dances and popular songs for guitar. Improvisation is the feature linking both sound-worlds: the high culture of church chapels and noble palaces, and the lore of streets and taverns. A careful study of the original sources guided our choices as to instruments and interpretation. According to historically informed practice, the celebrated Antidotum Tarantulæ and further early specimens of tarantella, as written down by the Jesuit scholar Athanasius Kircher, are played on bagpipes, drums and guitars.

While on their first album ‘Alfabeto Falso’ I Bassifondi refreshed the image of the Baroque guitar and its harmonic extravaganzas, with ‘Roma 600’ the ensemble brings the music ofseventeenth century Rome back to life with inspired and imaginative improvisation. Soprano Emőke Barath and violinist Enrico Onofri are the distinguished guest artists who join I Bassifondi in this new adventure