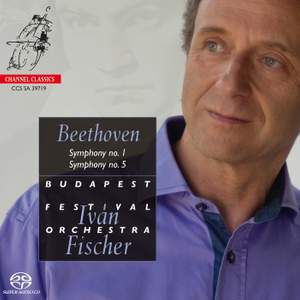 Of the two performances, the Fifth Symphony is particularly successful, Its first movement, taken at a real lick, has a tremendous atmosphere of excitement and coiled tension…There’s much to... — BBC Music Magazine, February 2020 More…

Beethoven's First Symphony, though rooted in his classical examples Haydn and Mozart, was nothing less than a turning point in the symphonic tradition and can be seen as a fitting farewell to the eighteenth century, as an exploration of new horizons, and as an energetic statement conceived so as to surpass his esteemed predecessors. (...) The Fifth Symphony is the ultimate proof of Beethoven's immortality. For who does not know the world-famous theme? Short-short-short-long. According to his friend and first biographer Anton Schindler, these first bars signify fate knocking at the door. He records that the composer told him: 'I will grasp fate by the throat'. (from: liner notes by Clemens Romijn )

Of the two performances, the Fifth Symphony is particularly successful, Its first movement, taken at a real lick, has a tremendous atmosphere of excitement and coiled tension…There’s much to enjoy in the First Symphony, too – not least, Fischer’s account of the witty finale.

Fischer leads a polished and powerful account of Beethoven’s Fifth, although he makes a few odd interpretative choices along the way. The opening Allegro con brio is propulsive and grippingly tense. It’s also remarkably clear-textured given that the Budapest Festival Orchestra’s strings dig in with such gusto...Certainly, the contrast here between the Fifth and First Symphonies could hardly be more pronounced.