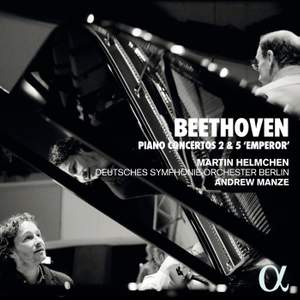 Helmchen really brings out the different approaches Beethoven took in these concertos. A sturdy, reliable recording of two great works. — BBC Music Magazine, May 2020, 4 out of 5 stars More…

As the celebration of the 250th anniversary of Beethoven’s birth approaches, and following a muchadmired version of the Diabelli Variations (Alpha 386 – Gramophone Editor’s Choice), Martin Helmchen has decided to record his complete piano concertos in the company of musical partners with whom he has a special affinity, Andrew Manze and the Deutsches Symphonie-Orchester Berlin.

They devote this first volume to the Concertos nos. 2 and 5, giving lovingly polished performances of these two masterpieces of the piano repertory. Composed even before Concerto ‘no. 1’, the ‘Second’ Concerto was premiered in Vienna in 1795, when Beethoven was only twenty-five years old, but underwent several revisions before being published in its final version in 1801. Concerto no. 5 is the last that Beethoven composed. Though completed in 1808, it was not premiered until 1811. Beethoven normally gave the first performance of his concertos himself, but this time his increasing deafness meant he was unable to do so.

Helmchen really brings out the different approaches Beethoven took in these concertos. A sturdy, reliable recording of two great works.

Helmchen applies himself to the solo part with flair, flexibility, sensitive phrasing, and a nice control of moods. Almost as important in the final outcome, however, is Andrew Manze’s conducting, which mirrors the piano very closely. It’s rare to hear pianist and conductor so sympathetically aligned.

Theirs is to all appearances a straight-down-the-middle approach. Yet it does stand high and proud for its artistry, poetry, stylish musicianship and, perhaps above all, rapport between soloist and conductor. This really does feel like a meeting of minds.

Helmchen’s sense of colour is abundantly present in his performance of the Emperor, an account noteworthy for its responsiveness to Beethoven’s structural adventurousness. The musicians revel in Beethoven’s transcending of expectations; Helmchen’s technique is more than equal to Beethoven’s trickiest demands. The performers capture the essence of the central movement without recourse to extremes of tempo, and the finale is particularly wide-ranging. These are excellent performances – the interpretative gold is undeniable.