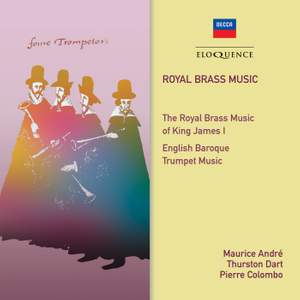 Despite distinguished contributions from trumpeter Maurice André, this attractive collection of 17th- and 18th-century English music for brass sounds anachronistic to ears accustomed to the more... — BBC Music Magazine, June 2020, 2 out of 5 stars More…

Holborne: Coranto: As it Fell on Holie Eve

Ferrabosco, A II: Almande No.5

Holborne: The fruit of love

1. Prelude (The Duke of Gloster's March)

4. Rondeau (The Prince of Denmark's March)

Two L’Oiseau-Lyre albums of English brass music from the 17th and 18th centuries, newly compiled and remastered and issued on CD for the first time. With this and several other albums issued in 2019, Eloquence celebrates the art of Thurston Dart, the harpsichordist, conductor and editor who played a leading role in the early-music revival in postwar Britain.

In 1960 Dart convened and directed a six-strong ensemble of trumpets and trombones to record a sequence of music written for performance at the court of King James I by a twenty-piece band of sackbuts and cornetts known as the Royal Wind Music. Part-books of their repertoire were edited and in some cases reconstructed by Dart and his colleague Trevor Jones, and the result is a splendid compilation of dances and fanfares by members of the king’s musical retinue including the violist and lutenist ‘Giovanni Coprario’ who, born in London in 1570 as John Cooper, changed his name in the early seventeenth century, doubtless to add foreign lustre to his reputation.

Dart’s ad hoc ensemble was led by the legendary French trumpeter Maurice Andre who, four years previously, had taken centre stage to record one of the first concerto albums in his long and distinguished career. The headline name in this trio of ‘English Baroque Trumpet Concertos’ is Jeremiah Clarke, whose successful career came to an abrupt and tragic end in his early 30s with his suicide in 1707. The nine movements of his Suite de Clark for trumpet, strings and winds were also reconstructed for this recording, and they include the Trumpet Voluntary (sometimes known as the Prince of Denmark’s March) to which countless brides have walked down the aisle. The names of Richard Mudge and Capel Bond are far less known than they deserve to be: musicians of the English Midlands, they each left hardly more than a single collection of six concertos. In these examples edited by Gerald Finzi, they nonetheless demonstrate high craftsmanship in the Italian style and a fine awareness of the then-modern, ‘galant’ mode.

‘In spite of the prevalence of D major, this disc is very enjoyable and has been well prepared and performed.’ - Gramophone, July 1957 (English Baroque Trumpet Concertos)

Despite distinguished contributions from trumpeter Maurice André, this attractive collection of 17th- and 18th-century English music for brass sounds anachronistic to ears accustomed to the more Spartan textures of period performance.