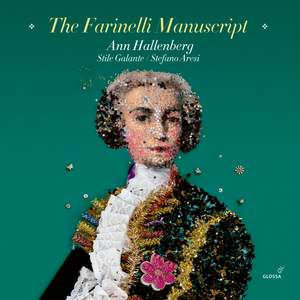 Hallenberg, her mellow yet incisive tone perfectly ‘centred’, has you gasping in admiration at her mingled virtuosity and expressive power...Beyond the virtuoso fireworks, Farinelli was famed... — Gramophone Magazine, December 2019 More…

With The Farinelli Manuscript, Ann Hallenberg - accompanied by Stefano Aresi and Stile Galante - offers a scintillating reading of the music known to have been sung by the castrato Carlo Broschi during his 23-year stay in Spain (and sent as a present to the Empress Maria Theresa). Described as “a force of nature”, displaying flawless coloratura and a purity of timbre, the Swedish mezzo follows her previous appearance on Glossa (Aresi, a disc devoted to music associated with the later castrato Luigi Marchesi) with

a spirited demonstration of the musicality which so attracted Farinelli to listeners at the Spanish court.

Enticed to Madrid at the height of his powers in 1737 Farinelli provided regular concerts for the Spanish queens, Elisabetta Farnese and Maria Barbara de Bragança and their respective husbands, Felipe V and Fernando VI, singing some 8 or 9 arias at these soirées. According to present-day attributions, amongst the compositional hands discernible in the manuscript is the work of musicians active in Madrid: Niccolo Conforto, Giovanni Battista Mele and Farinelli himself. The music of other prominent Italian composers of the time - Giay, Latilla and Giacomelli - also appear in the manuscript.

Hallenberg sings the written-out ornaments and da capos appearing in Farinelli’s manuscript, with Aresi providing others and following the precise instrumentation and ensemble layout as detailed in court archives. Aresi also contributes an essay for the booklet which continues the debunking of historical misinformation surrounding Farinelli’s time in Madrid.

Hallenberg, her mellow yet incisive tone perfectly ‘centred’, has you gasping in admiration at her mingled virtuosity and expressive power...Beyond the virtuoso fireworks, Farinelli was famed for the subtle inwardness of his singing. Hallenberg can be aptly dulcet too...if anyone today – other than Bartoli – has the technique and imagination to make them live, it’s Ann Hallenberg.

Hallenberg’s performances are as exceptional – and then some – as one might expect from a singer equipped to sing this repertoire in a manner given to few others…There can be no doubt that this is a stunning example of vocal virtuosity, a CD that demands to be heard by anyone remotely interested in Baroque opera and indeed great singing.

The performances are excellent, and there is great interest in the decorations and embellishments notated by the singer himself as a guide to the style of the times.