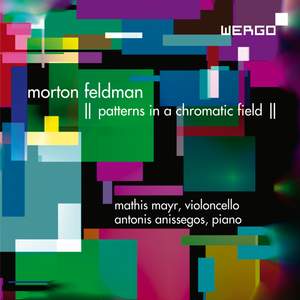 This composer obviously feels things deeply and believes in traditional “expression.” But the sort of frenetic jagged eruptions one hears in the first movement are at least as much a fruit of... — Fanfare, July/August 2020 More…

Morton Feldman's Patterns in a Chromatic Field is a major composition, not only in modern American music but in 20th-century music per se. The composer plays with the musical memory of his recipients and thus creates timeless spheres: In minimally varying patterns, the listener experiences a trance-like avant-garde event in which past, present and future cancel each other out. Patterns in a Chromatic Field is based on the principle of differentiation and repetition. The composition functions like a still life, using the color variations of Middle Eastern rugs as a basis: Even a pattern that appears to repeat itself exactly is actually slightly different in its iterations because of slight changes in hue. In his piece for piano and violoncello, Morton Feldman now creates a large-scale auditive pattern whose sound aesthetics from the layers of notes is no less than a transformative and meditative experience of music. With Antonis Anissegos on the piano and Mathis Mayr, this recording unites two performers who not only are excellent instrumental players but also feel at home in electronic music – a fact that is of benefit to their version of Morton Feldman’s minimalist soaring tonal architecture. Anissegos and Mayr create a detailed and intimate sound quality which can be regarded as referential in its antithesis of the ‘dramatic’.

This composer obviously feels things deeply and believes in traditional “expression.” But the sort of frenetic jagged eruptions one hears in the first movement are at least as much a fruit of postwar complexity as of pre-World War I neurosis. In fact, the whole piece has the feel of an intersection of Nono and Mahler. This is a powerful and substantial piece, immaculately rendered.

Feldman develops a startling new mode of continuity, a challenge to both performers and listeners, but offering a deep, meditative, atonal satisfaction.