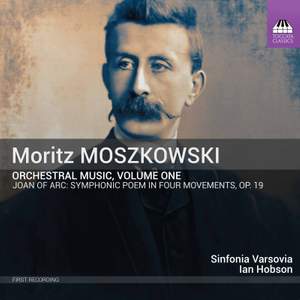 There’s much to like in this well-drilled and responsive reading. It offers a different slant on a composer whose posthumous reputation is that of piano pot-pourris. If not everything is convincing,... — MusicWeb International, November 2019 More…

The Polish composer Moritz Moszkowski (1854–1925) is best remembered for a handful of virtuoso piano pieces, but he also produced a substantial body of orchestral music, most of it unperformed for decades. Astonishingly, he was only in his early twenties when he wrote his monumental ‘Symphonic Poem in Four Movements’ Johanna d’Arc – heard here in its first recording – a vast symphonic fresco depicting the life, death and transfiguration of the heroine of Friedrich Schiller’s 1801 play, Die Jungfrau von Orleans. Moszkowski admitted to the influence of Wagner and Raff on the work – but he also managed to prefigure the musical language of the Hollywood epics of sixty years later. As pianist, Ian Hobson has a long-standing relationship with Toccata Classics, and this is the fourth recording he has made in his alter ego as conductor – at the helm of the Sinfonia Varsovia, as with his previous albums, which uncovered the early orchestral music of Martinu. This is the first of a series of Ian Hobson recordings for Toccata Classics that will focus on Moszkowski’s piano and orchestral music.

There’s much to like in this well-drilled and responsive reading. It offers a different slant on a composer whose posthumous reputation is that of piano pot-pourris. If not everything is convincing, and is said at too great a length, then perhaps subsequent performances would have allowed Moszkowski to rethink the work’s proportions.

Hobson and the superb, Warsaw-based Sinfonia Varsovia […] give us an outstanding performance of another, long forgotten, orchestral work. […] the bass [is] clean and goes down to rock bottom with some seismic, bass drum thumps that will exercise your woofers. This CD will […] leave ardent romanticists anxiously awaiting Toccata's next volume in this series.

Moszkowski admitted the influence of Wagner and Raff on the work, but it is also unmistakably influenced by Liszt.
The composition is played very well by the Sinfonia Varsovia under Ian Hobson, the recording is transparent and well proportioned, but the music does not become really exciting.