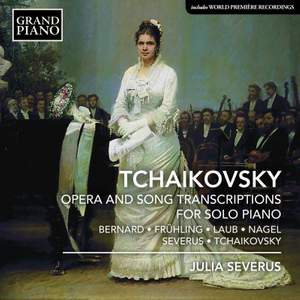 Tchaikovsky: Khotel bi v edinoye slovo (I should like in a single word)

No. 5, The Fires in the Room Were Already Out [Arr. A Bernard for Piano]

No. 6, None but the Lonely Heart [Arr. J. Severus for Piano]

No. 6, Sleepless Nights [Arr. A. Bernard for Piano]

Tchaikovsky wrote over 100 lyric art songs or Romances, a sequence of diaries of the soul that embrace moods from euphoria to despair. They were unusually important to him, and he, or his editors, commissioned piano transcriptions by eminent musicians such as Laub and others, all of which were revised by Tchaikovsky. These poetic and melodically beautiful songs, many of which are here recorded for the first time, include the ravishing None but the Lonely Heart and reveal a ‘new’ body of Tchaikovsky’s piano repertoire. The album concludes with an opera fantasy on themes from Eugene Onegin by the Austrian composer and pianist Carl Fruhling. Julia Severus graduated from the Berlin University of Arts and from the Moscow Tchaikovsky Conservatory, where she studied piano with Mikhail Voskresensky and Lev Naumov. Wishing to explore piano ensemble repertoire, she founded the Aurora Duo and Quartet, performing numerous premieres and world premieres, among them Rodion Shchedrin’s Hommage a Chopin in the presence of the composer.

a very enjoyable and well-balanced recital.