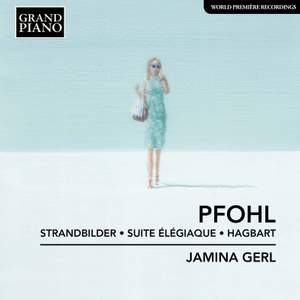 Esteemed as one of Germany’s leading music critics, Ferdinand Pfohl never lost a passion for composition that had been nurtured in Leipzig. He wrote highly individual works for his own instrument, the piano, conceiving cycles that reveal harmonic daring and sophistication, often evocative of developments in impressionism. As Strandbilder (‘Beach Pictures’) shows, he mastered tonal painting- while in the compositional unity of Suite elegiaque, Bohemian and Russian elements mingle with the influence of one of his great heroes, Grieg. Artistic depth, technical superiority and a remarkable sense of tonal color are the trademarks of the young German pianist Jamina Gerl. She has studied under Roswitha Gediga, Eduard Zilberkant and Nikita Fitenko. A prizewinner at multiple piano competitions, she has performed in such prestigious venues as the Steinway Hall and Carnegie Hall in New York, the Tonhalle Dusseldorf, Nordstrom Recital Hall, and more.