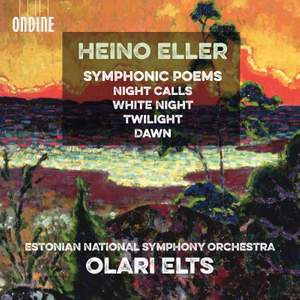 [Twilight and Dawn] have long been familiar through Neeme Järvi’s Chandos recordings but the greater refinement of playing and sensitivity of Elts’s readings are their own justification. Certainly... — Gramophone Magazine, January 2020 More…

This second volume in a series dedicated to the orchestral works of Heino Eller by the Estonian National Symphony Orchestra under conductor Olari Elts is a ground-breaking introduction to one of the founders of the Estonian school of music. The present volume consists of Eller’s symphonic poems and contains some of Eller’s earliest symphonic works, including one of his most well-known works, Dawn (Koit). The Estonian Philharmonic Chamber Choir is one of the best-known Estonian music ensembles in the world. The choir was founded in 1981 by Tõnu Kaljuste, who was its artistic director and chief conductor for twenty years. The repertoire of the choir extends from baroque to the music of the 21st century, with a special focus on the work of Estonian composers, such as Arvo Pärt, Veljo Tormis, Galina Grigorjeva, Tõnu Kõrvits and introducing their output to the world. The choir has won the Grammy Award twice and has received 15 Grammy nominations. Other awards include the Gramophone Award, the Diapason d’Or, and Preis der Deutschen Schallplattenkritik.

[Twilight and Dawn] have long been familiar through Neeme Järvi’s Chandos recordings but the greater refinement of playing and sensitivity of Elts’s readings are their own justification. Certainly no one coming to this music afresh will be disappointed by what is on offer here.

Add this to your Eller collection without delay.