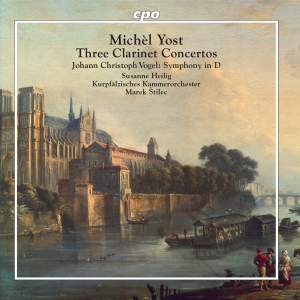 Michèl Yost, a Parisian by birth, was a famous French clarinet virtuoso in his time. He is regarded as one of France’s first important clarinetists and as the cofounder of the French school of clarinet playing and gained renown beyond France’s borders already during his lifetime. Along with clarinet chamber music and a collection of études that is no longer extant, we know of fourteen clarinet concertos by Yost, some of which he composed in collaboration with the German composer and Paris resident Johann Christoph Vogel. Susanne Heilig, who since 2001 has been the principal clarinetist of the Bielefeld Philharmonic, interprets the solo parts of predominantly virtuosic character. The symphony by Johann Christoph Vogel rounding off the album contains a last movement with dramatic and even gloomy elements distinguishing it from what were often the very light and pleasant concluding movements of the symphonies and instrumental concertos of his period and displays surprising musical turns of events setting it apart from the average symphonic music of its times.